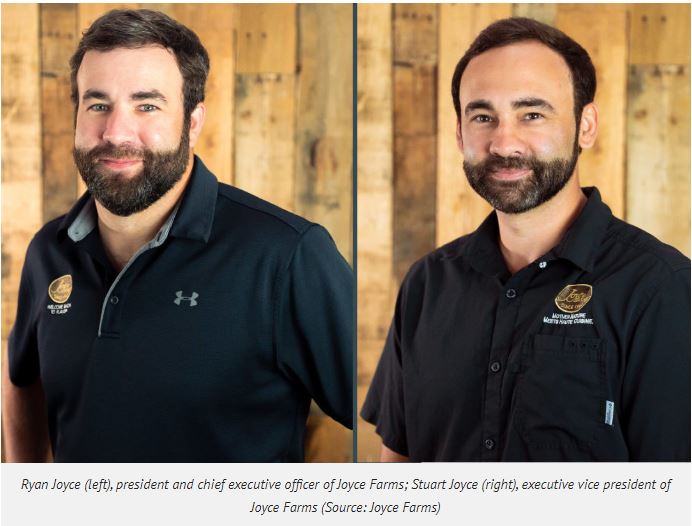 WINSTON-SALEM, NC. — Joyce Farms, a producer of grass-fed beef and heritage poultry products, announced that a third generation will be taking over the reins of the family business.

Ron Joyce, who worked as president and CEO during the last 40 years, plans to remain chairman of the board and will remain in an advisory role with the company.

“Both of them grew up in the business,” said Ron Joyce. “They helped build Joyce Farms into a successful third-generation company. I am proud of them and what they have already accomplished. This will allow Joyce Farms to continue to grow as a family owned business long into the future.”

Joyce Farms was founded in 1962 by Ryan and Stuart’s grandfather Alvin Joyce. They are now succeeding their father Ron, who joined the business in 1971 and headed the growth from a small chicken wholesaler to a multi-species meat and poultry producer specializing in heritage breeds and regenerative farming practices.

“Ron leaves behind big shoes to fill,” said Ryan Joyce, “but thanks to his hard work, we have a strong foundation to build on as we lead Joyce Farms into the future.”

Ryan first worked for Joyce Farms in 2008 after graduating from NC State University with a degree in Business Management. In 2010, Ryan left the company to attend Wake Forest University, where he earned his JD/MBA, and passed the North Carolina Bar soon after. He returned to the company in 2014 as vice president of finance.

Stuart joined Joyce Farms after graduating from NC State in 2010 with a Bachelor of Science degree in Agricultural Business Management. He oversaw all poultry operations from plant and hatchery in Winston-Salem to the growing out of birds in the company’s Heritage Poultry line.